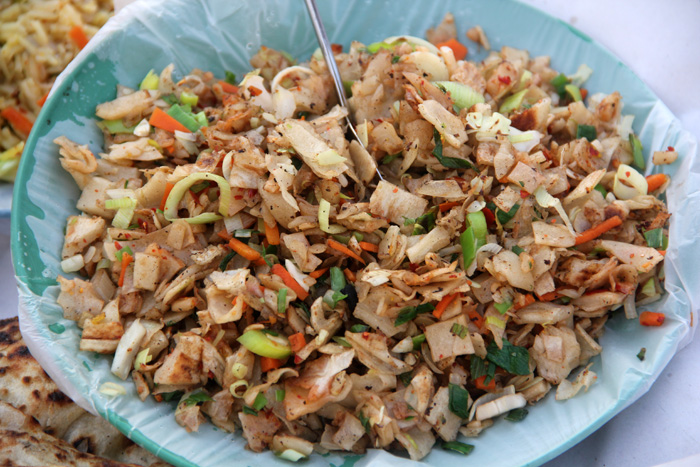 Essentially it is composed of shredded pieces of Sri Lankan godamba roti, which is sort of like a giant sized paratha (an oily fried piece of thin dough), that is stir fried with an assortment of spices and a choice of other meaty (or vegetarian) ingredients.

Kottu roti is sort of like the “hamburger” of Sri Lanka, something that’s so tasty, available as a fast meal, and it’s basically nearly impossible to resist.Top of Form

To take things even to the next level, kottu is usually served with a separate bowl of curry sauce, used to moisten and add extra flavor to the stir fried flatbread. 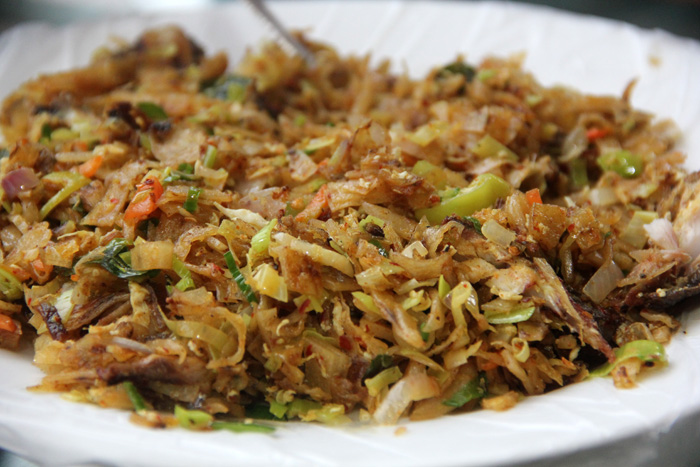 Another variation of kottu is with vegetables and egg – a very good combo, one of my particular favorite variations of the dish.

The vegetables include a few meager sprigs of leek, onions, and cabbage, and the sizzling godamba roti is lathered with egg to make it even richer…and more delicious.

The egg adds some extra protein, which is always a good thing. 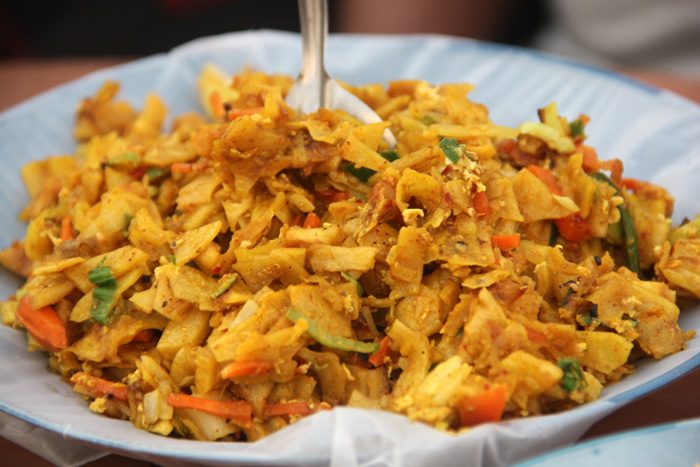 Yellow curry powder flavor is bumped up a few notches with cheese kottu and it’s a Sri Lankan food that you just can’t miss. The cheese is not traditional yellow cheese, but rather more like cottage milk cheese. 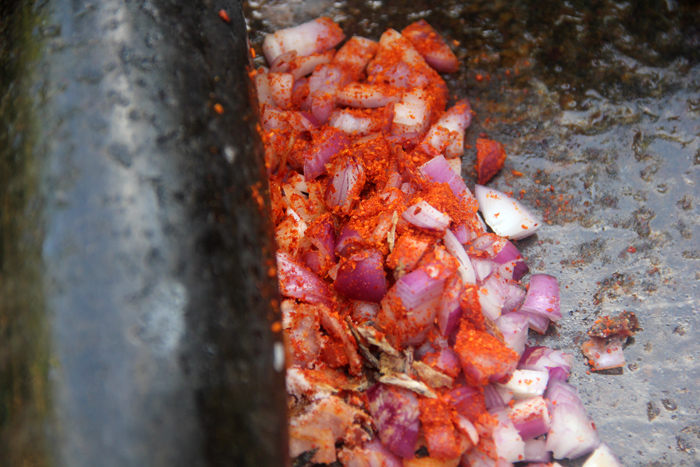 Luni miris is the combination of chilies, onions, salt, and occasionally a few bits of Maldive fish for extra flavor. The ingredients are ground into a chunky paste using a Sri Lankan mortar and pestle.

The result is a superb sambol chili sauce that goes well with just about everything. 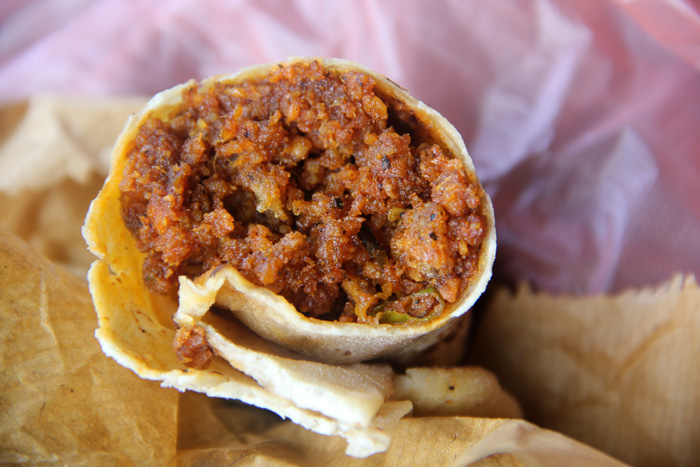 This is not a common Sri Lankan food, but after devouring this burrito looking roti in Kandy I couldn’t help from including it on this list.

It was phenomenal…and though it was all soy protein, it tasted nearly identical to Mexican pork chorizo and eggs. 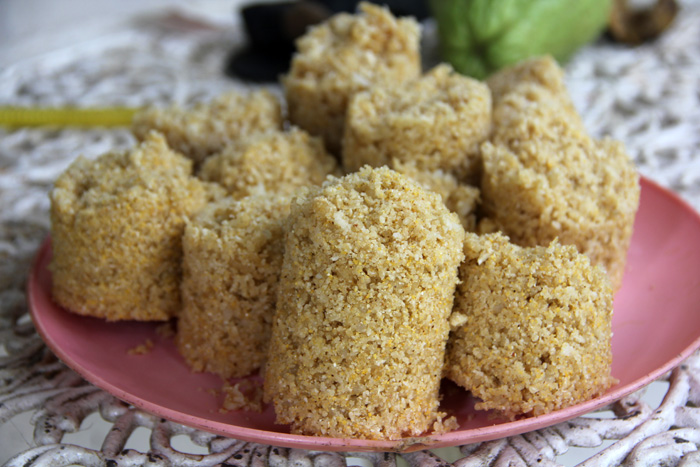 Sri Lankan pittu funnel cakes are a combination of flour (either rice of karukan), fresh shredded coconut, and a handful of desiccated coconut. The precious little cakes are traditionally steamed in bamboo, but now are sometimes steamed in circular metal tubes.

After being cooked, the crumbly textured pittu cakes are served with fresh sweetened coconut milk. 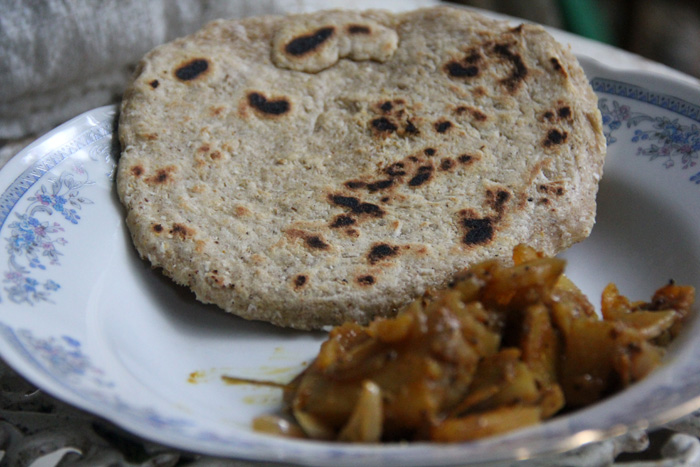 Roti in Sri Lanka is less greasy and more of a thick tortilla like flatbread (paratha are the greasy flat-breads).

In Sri Lanka, roti are made with freshly grated coconut, flour, water and salt. They are made into balls of dough, flattened, and then cooked on a hot griddle.

Any form of spicy curry sauce handles the task of being the dip for a delicious pol roti. You can enjoy eating pol roti for breakfast along with a big fresh bowl of pol sambol. 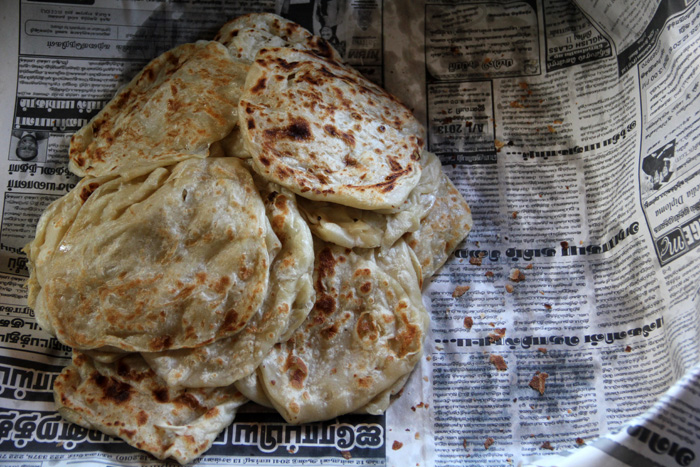 What’s known as paratha in Sri Lanka is similar to a roti in Malaysian food, or an African chapati.

The greasy flaky flat-bread is melt in your mouth delicious, especially when dipped in coconut milk curry sauce. 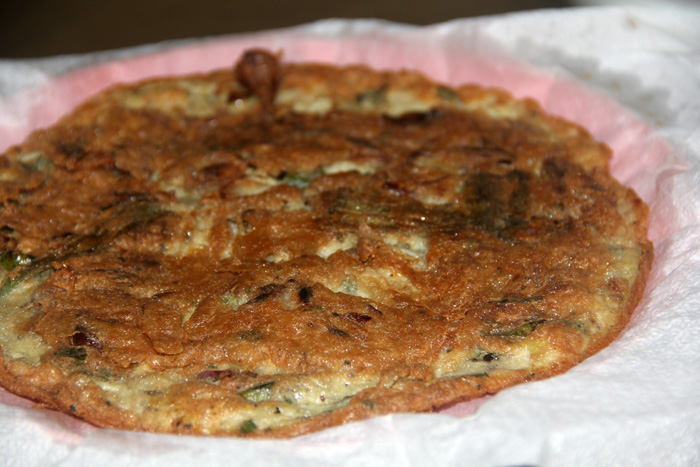 Sri Lankan omelets are loaded up with local spices like cumin and curry powder and then simmered in a layer of oil coconut oil so it turns golden brown. Over a plate of rice and alongside some shredded coconut garnish, a Sri Lankan omelet is heavenly. 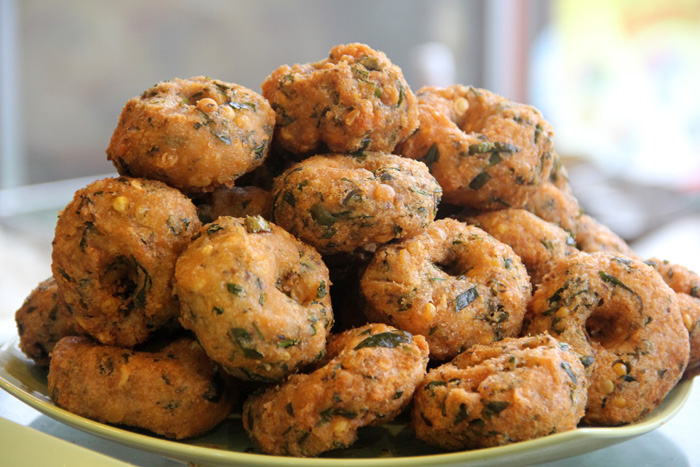 These marvelously tasty little fritters are made from daal, combined with incredible spices, and deep fried to crunchy perfection. 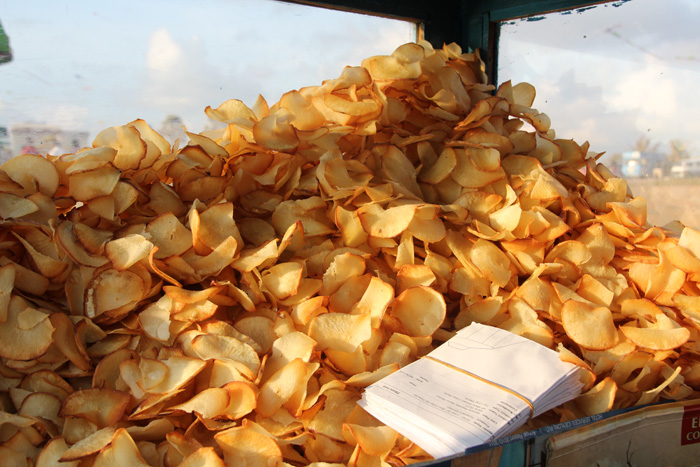 100 LKR will get you a small paper bag of salty Cassava chips at everywhere in Sri Lanka. 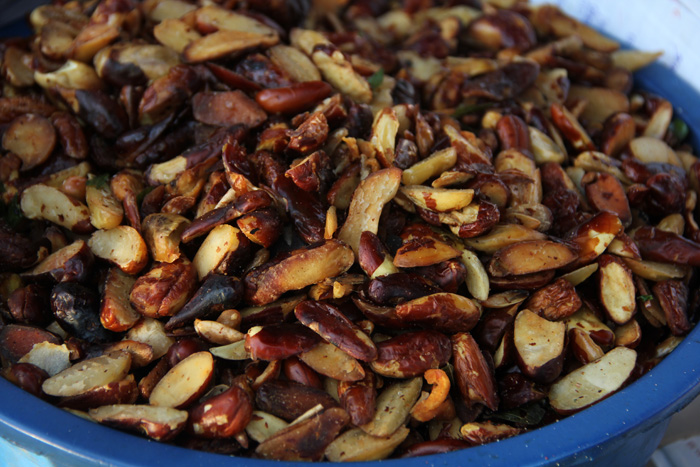 Another popular snack in Sri Lanka are deep fried jackfruit seeds. They are salted and served in small paper bags made from scrap paper. 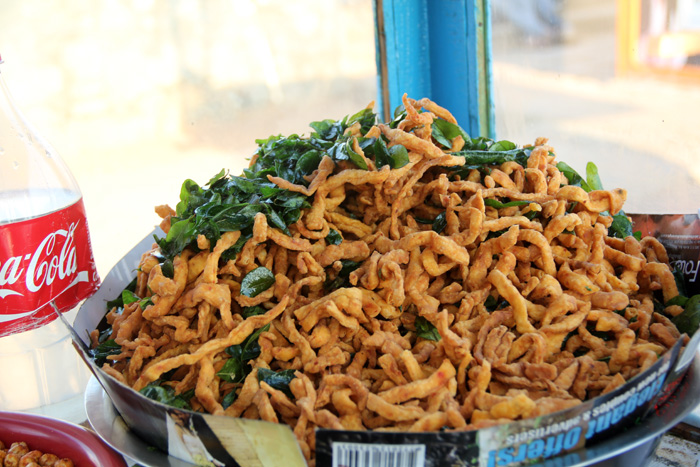 Sri Lanka is a country that loves their deep fried snacks. These snacky morsels of batter were heavily salty and seasoned with fried curry leaves. 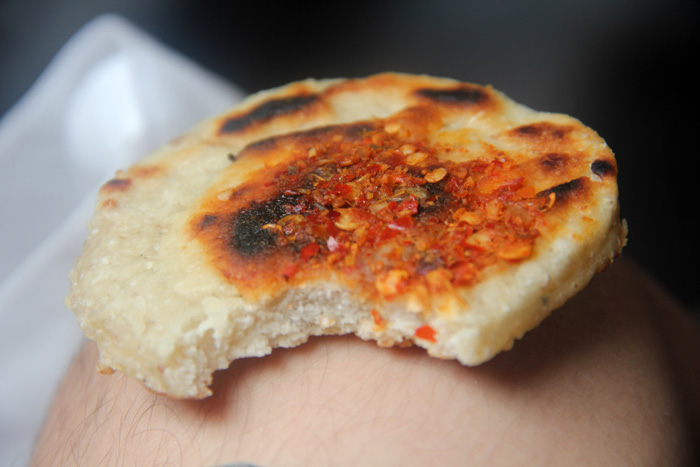 It almost tasted like a Sri Lankan mini pizza. 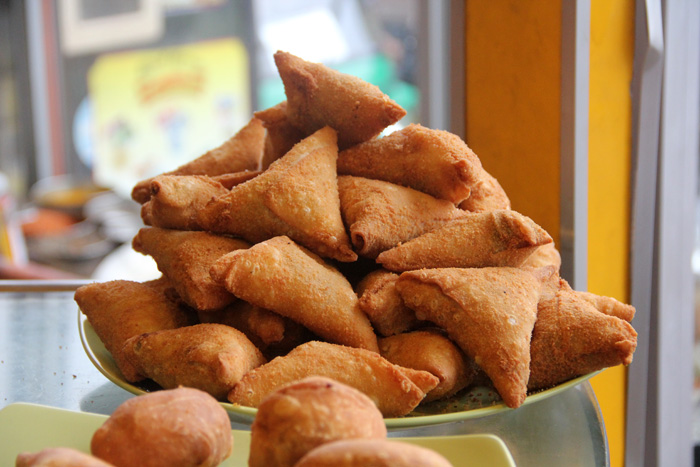 From Indian food to Kenyan dishes, samosas have become a popular snack from coast to coast. Some are filled with meat, while others are vegetarian. 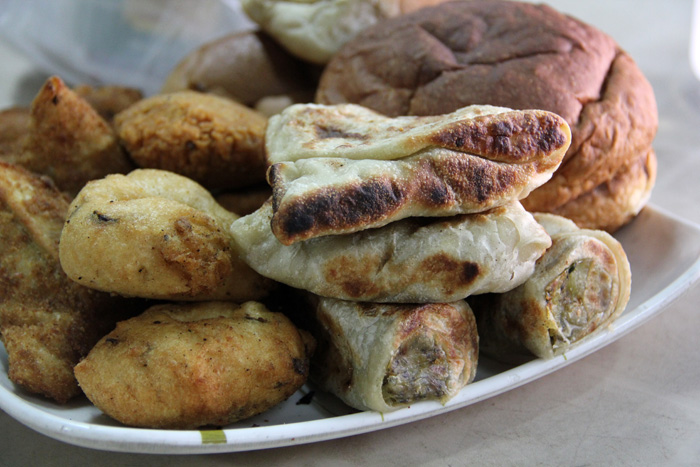 The triangular looking pockets are a form of roti filled with a range of different ingredients. Fish was my preferred filling, but there were also some nice vegetarian versions available. Instead of being deep fried like samosas, triangle roti’s are just skillet fried. 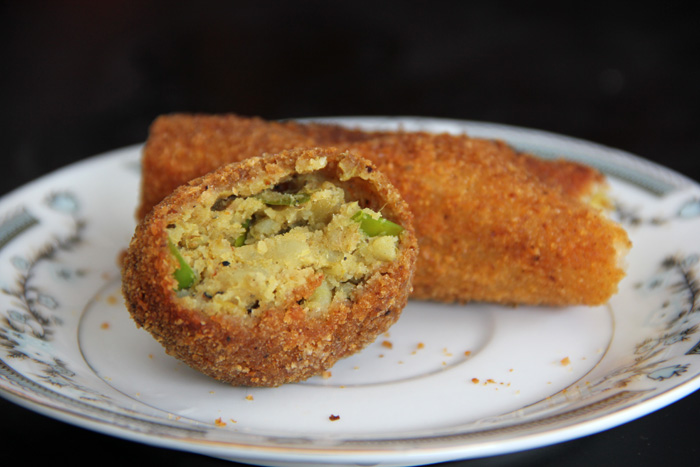 The Chinese egg rolls in Sri Lanka were so-so, but the fish cutlet balls  were absolutely wonderful. It’s like a little grenade of fish packed into a breaded ball and deep fried.

When it comes to short eats in Sri Lanka, there’s no need to go any further than the fish cutlets – they are delicious. 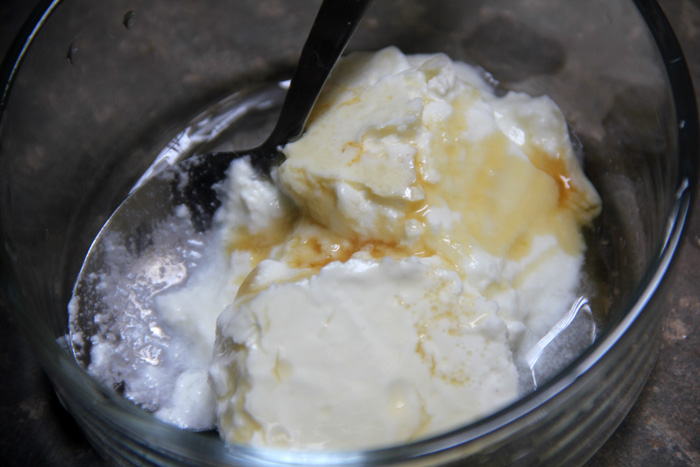 In India, curd is often eaten with rice or mixed with something; In Sri Lanka curd is devoured drizzled with kithul treacle – syrup made from liquid jaggery. 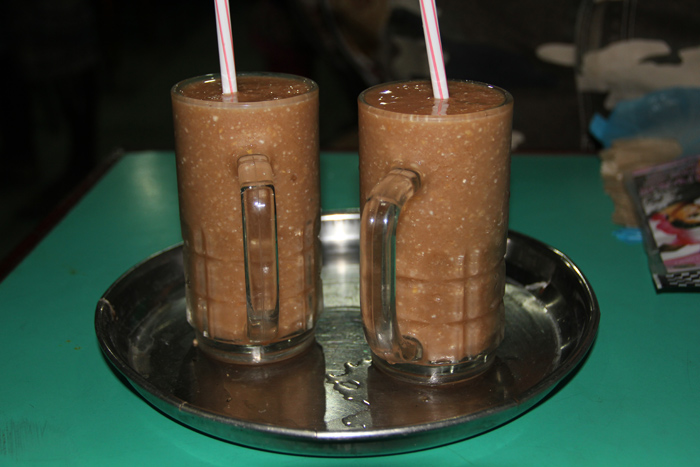 The outer shell smells a bit like rotting blue cheese mixed with dirty socks. The inside of the fruit looks a bit like diarrhea, but tastes similar to a tamarind. As a religious fan of durian, I’m not one to judge a fruit by its shell.

Despite the looks of this wonder fruit, woodapple juice in Sri Lanka is wildly popular – and I’ll be first to admit that it tastes pretty good when it’s blended up with some sugar!

There’s nothing better to wash down Sri Lankan food with, than a big cup of woodapple juice! 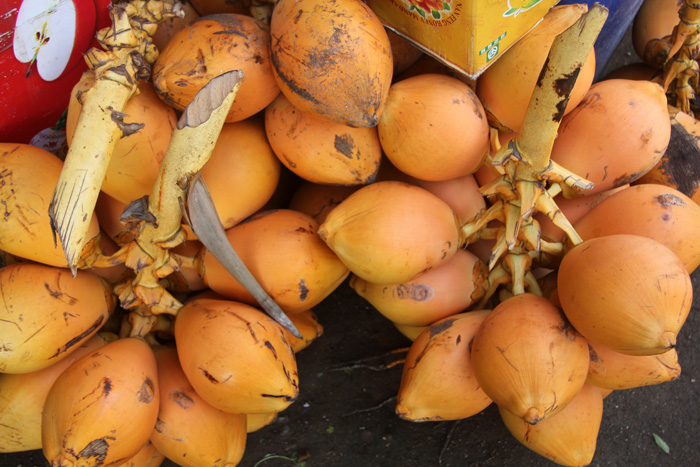 No component of Sri Lankan food is more vital than that holy coconut. In Sri Lanka there are many varieties of this special fruit, including the orange colored king coconut.

These coconuts line the streets around the country and are sold just for their sweet water. Each coconut costs from 70 – 100 LKR 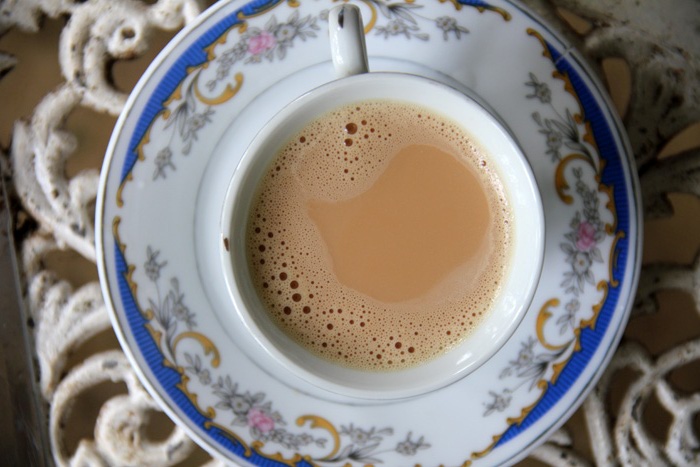 Sri Lanka is one of the world’s leading producers of tea – no trip to the country would be the same without multiple cups a day.

Milk tea as well as ginger tea and plain tea are all popular and widely available choices.